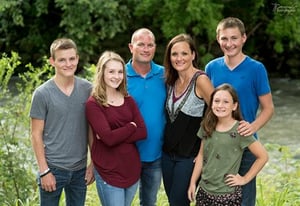 The Grounds Guys franchise is known across the nation for excellent customer care and quality landscaping and lawn care services. But the world of the franchise owners behind the brand may be lesser known. What does the journey of a local owner look like? Some franchisees converted their existing landscape business to The Grounds Guys to get unique support, while others started their first business with this Neighborly brand. We sat down to interview two franchisees who took their first leap into business ownership with The Grounds Guys, digging in to what inspired and helped them along the way.

Jim Schimmenti, owner of The Grounds Guys of Garden City, managed nurseries and worked in landscape construction before taking the leap into business ownership.

What made you choose The Grounds Guys instead of any other option?

These two owners came from entirely different backgrounds, and they felt comfortable with The Grounds Guys for different reasons. One loved the sense of direction and ethical company culture, while the other enjoyed that his experience in the industry was being utilized.

Baker: “What made me actually choose The Grounds Guys was the culture of C.A.R.E, the family mentality, and the direction from The Grounds Guys corporate to do the best you can at running a positive and ethical business and taking care of your customers and your employees.”

Schimmenti: “I’ve had some industry experience, so that’s what drew me to The Ground Guys. […] I felt a little more comfortable in this area because I knew what I was getting into, knowing the fluctuation and seasonal aspect of being a landscaper.”

What surprised you about the initial process of becoming a franchisee?

Both owners hit the ground running with great work ethic when their businesses opened. Schimmenti was impressed with the initial steps to becoming a franchisee.

Baker: “The only surprise I had is I had never been in business before. I had worked for government from age 18 to 33. One thing I learned quickly about the private sector is once you open, you better be ready. It’s like getting on a rollercoaster that keeps going around. If you’re going to own a business, once you start, it’s time to get going; it’s time to find your customer. All your parts are coming together.”

Schimmenti: “I dealt with a really good sales developer, and she brought me to The Grounds Guys and let me make my own decision, and not a hard sell. I was impressed when I came to Waco and saw firsthand […] what they were looking to implement through the franchise itself and what they expected of me.

"I felt like we were setting up more of a partnership; they had their responsibilities and I had mine to live up to.

"And if either of us did not live up to those expectations, then we were not going to be successful.”

Describe the most rewarding part of owning your business?

From building a better financial future to honoring your own ideas and decisions, the rewards of franchising can be freeing. For these franchisees, The Grounds Guys offered a chance to achieve what they previously hadn’t thought possible: successful business ownership.

Baker: “For me, it’s been a very life-changing experience. The whole reason I decided to franchise is that I had grown up in a very traditional, blue-collar, modest-income family. No one had ever done business before. I wanted to change the financial trajectory of my family—change the future of my kids and grandkids and build some financial [resources] for them, be it college funds or inheritance. [I wanted to] see what I was capable of doing in my natural lifetime.”

Schimmenti: “I had never thought I was capable of owning my own business. But once I did, the best part was realizing that the decisions I made were my own—whether good or bad, I owned those decisions for my business. […] You’re not second-guessed like you may have been when you worked for someone. I felt like my ideas were getting pushed down before, and [as a franchisee] you get to run with it. It’s my vision, and I can push forward.”

What advice would you give to a potential franchisee of The Grounds Guys?

These owners shared their best advice for important areas of focus as a franchisee: hard work, following the system, and smart budgeting.

Baker: “Franchising is not what makes you money. It’s a personal decision that you have to be a good business owner, get up every day, hit the ground running, inspire your employees, and be the one who makes all the hard decisions. The franchise can give you all the tools you need, but if you’re not committed and determined, it’s not going to work. You have to be the one to turn the wrench and hammer the nail. That’s exactly why I chose a franchise: I didn’t think I had the know-how and background to just open a business from the ground up. So, if you are a sponge and just absorb everything they tell you, and attempt to put [the system] into practice, it works. And it worked for me.

"If not for them, I would have been out of business within six months of opening.”

Schimmenti: “My biggest piece of advice is to run a budget and make sure you’re financed to get through the hard times for at least the first two years. You need to know, especially as a startup, when you have zero sales and lots of expenses. You have to make sure you can cover that, even if you don’t have the revenue coming in right away.”

What are the biggest advantages that The Grounds Guys has brought you?

The structure of The Grounds Guys and the greater Neighborly franchise system gave these owners unique advantages, including a franchise coach (FC) dedicated to each.

Schimmenti: “For me, it’s accountability. I need to be accountable to myself, and my FC basically keeps me on track—because I know there are things you don’t want to do as a business owner. And they really push me […], basically making sure I get homework done.”

Where would you be if you had not chosen to franchise with The Grounds Guys?

Before he was a franchisee, Baker was a police officer. Schimmenti worked in management for nurseries and landscaping contractors. Here’s how they envision their lives without The Grounds Guys franchise.

“Where would I be? In an ugly place—the violence, the negativity, the death, the pure emotionally draining 12 hours a day. I’d still be missing my kids’ events, their music programs. I’d still be going to work every day, holding my place. Now I can take off when I want and take a day to go on a field trip. I can leave early and go to [my kids’] programs. Being a cop, I missed out on so much of that. And personally, my wife would say I’m a different person than when I was a cop.”

Schimmenti: “I would either be working for another firm as an employee or, if I opened up my own business, I probably would not have grown as quickly as I have now. I would have made a lot more mistakes, and it would have taken me a lot longer to get to the place where I am now.”

Baker closed our conversation with a great analogy. “Opening the business doesn’t mean you’ll get rich in a day or a year. It compounds over time, and it grows. And at the same time, your infrastructure comes into place.” That infrastructure, and the resources required to protect that investment, are what The Grounds Guys wholeheartedly provides to all local owners. The Neighborly franchise network deepens that support with cross-promotions, lead generation efforts (including the consumer-facing getneighborly.com), and a true family of people who care about franchisees’ success.

To learn more about The Grounds Guys franchise opportunities, download this guide! 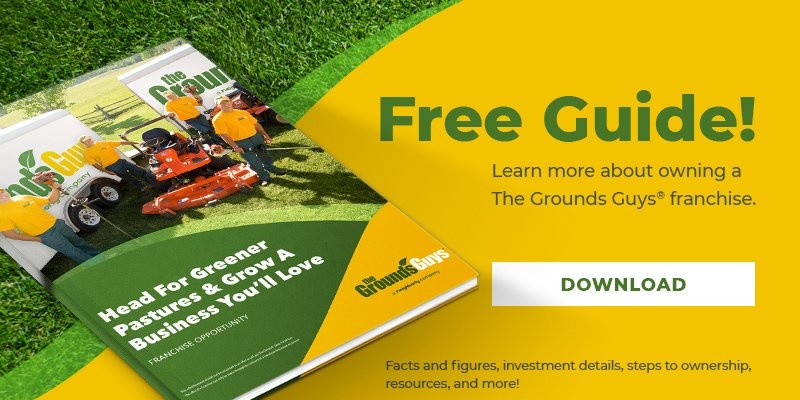 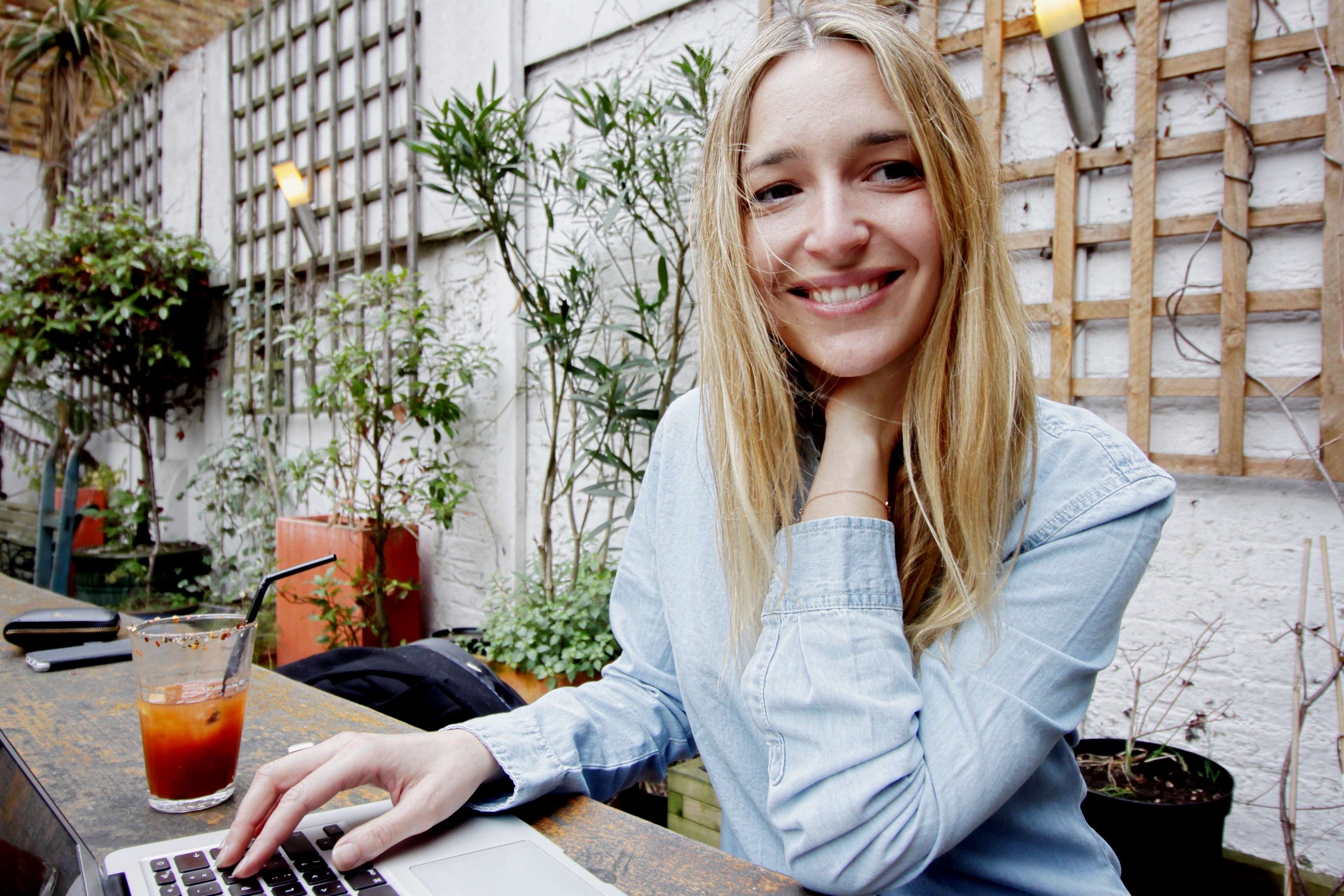